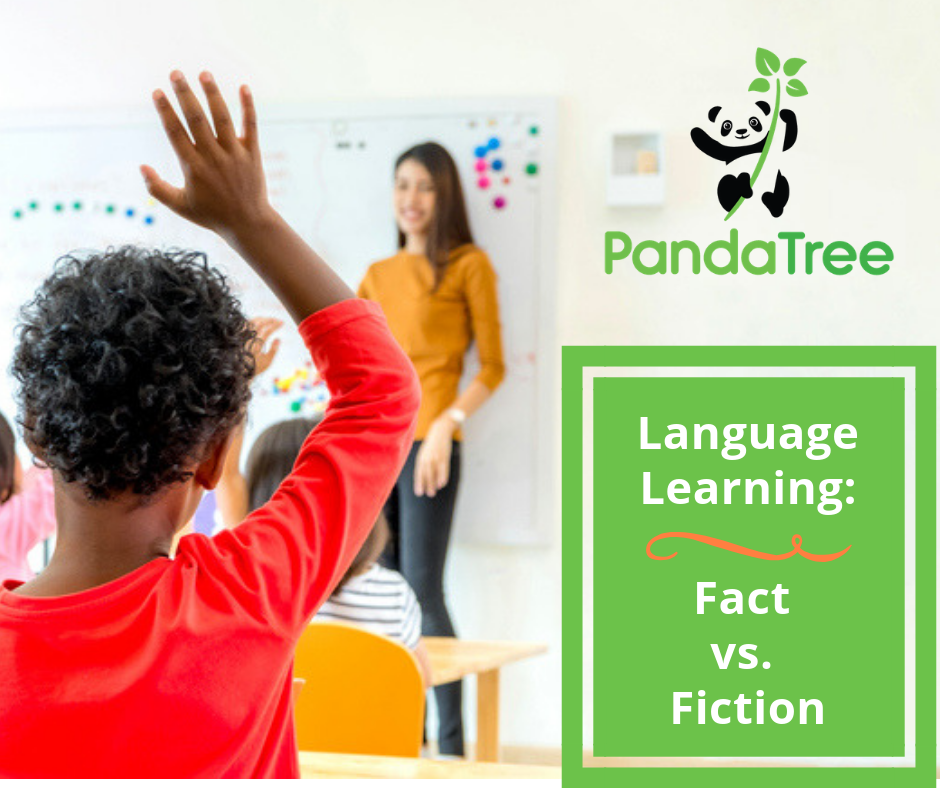 Many adults—particularly in the U.S., where learning a second language isn’t nearly as common as it is in the rest of the world—are concerned that children will be disadvantaged or confused if they try to juggle two vocabularies. Others worry that kids won’t learn to speak as quickly as their peers. The good news is, most of these misconceptions are just that: misconceptions. Language learning is widely acknowledged to be highly beneficial for children’s cognitive and social development, with benefits that last a lifetime. Here, we’ve broken down some of the myths and facts to ease concerns that parents may have, and to get back to the fun part of learning!

Learning a second language at a young age confuses children.

False: Parents often worry that children who learn two or more languages will become confused as they try to distinguish between one language and another. Part of the reason behind this myth is a behavior known as “code-switching,” in which speakers inject a word from another language into their speech. But code-switching is not only perfectly normal, it’s easily explained. Sometimes a word from a different language is just a better fit. Kids see the adults around them do this and copy the behavior. And researchers have observed that speakers only code-switch when their listener understands the other language too.  Code-switching isn’t an indication a child is confused; it’s a pretty sophisticated indication that they’re mimicking the norms around them.

Learning a second language is easiest when you are young.

True: Researchers call the time in a child’s life when they’re best able to acquire a second language the “critical period.” This period begins at birth, when babies are primed and ready to learn whatever languages are spoken in their household. And while studies have shown that the critical period may last up to the age of 17, it’s best for children to begin their second language learning process before the age of ten.

Experts aren’t 100% sure why children learn languages so easily, but some theories include the fact that second-language learning is often part of play when kids are young, making it fun rather than tedious; that kids are less self-conscious about making mistakes; and that neuroplasticity—the ability for the human brain to be flexible in learning and approaching the world—is particularly high in kids.

Most children in the world speak more than one language.

True: Over half of the world’s population is bilingual, and many within that group learned to speak more than one language from the time they were young. In most European and Asian countries, primary schoolchildren are already learning English when they start their formal education. And according to the Pew Research Center, older children in as many as 20 European countries are on to learning their third language by the time they’ve mastered the first two. It’s time for the U.S. to catch up!

Learning more than one language while young can cause delays in speech.

Temporarily True. When children grow up in bilingual homes, they may experience what appears to be a delay in speech. In fact, what they are experiencing isn’t a delay, but rather a normal part of bilingualism. In a 2012 study published in the Journal of Child Language, researchers Erika Hoff and Cynthia Core from Florida Atlantic University found that monolingual and bilingual children may know the same total number of words, but that since monolinguals are dealing with only one language, their vocabulary in that language is more robust. This development is typical and to be expected, note Hoff and Core in a later paper.

Further research from experts at the University of Bath has shown that this delay resolves itself by the age of five, at which point bilingual children largely catch up to their monolingual peers, and then overtake them. A study of over 17,000 students showed those who studied a foreign language outperformed their mono-lingual peers on standardized tests for English and Math. So that extra challenge you’re giving your youngster’s brain by starting a second language early pays dividends in the long run.

Learning a second language at a young age changes how the brain is structured.

True…and in the best way possible. Researchers at the University of Washington recently discovered through noninvasive scans of baby’s brains that those growing up in bilingual households where both English and Spanish are spoken were able to recognize and process sounds from each language. Monolingual children, on the other hand, only recognized and processed sounds from one language. That ability in bilingual kids leads to significant cognitive advantages down the road, including improved executive functioning—switching seamlessly between tasks, increased ability to focus on the task at hand, and better problem-solving skills.

In 2009, researchers at Cornell identified another advantage: Young children who are raised bilingual are better able to tune out distractions and outside stimuli. This sets the stage for success in the classroom—especially in today’s world, where distractions are everywhere.

True: When children learn a second language, research has shown that it increases their ability to put themselves in other people’s shoes. They’re better able to understand that other people might hold beliefs, values and perspectives about the world that contrast with the child’s based on their experiences, and that those beliefs and perspectives aren’t wrong—they’re just different. For instance, a 2015 study published in the journal Psychological Science found that bilingual children and children who’d been regularly exposed to a second language were more than twice as likely to be able to see a situation from a stranger’s point of view than monolingual children.